In March and April of 2018, delegates from all of the territories, and from each branch, will gather in Rome for three different events that will take place over the course of about three and a half weeks : 1) the General Chapter of the Legionaries of Christ (March 26 – April 7, 2018), 2) the General Assembly of the Consecrated Women of Regnum Christi (March 26 – April 7, 2018), and 3) the Joint General Assembly of the Regnum Christi Movement (April 9 – 18, 2018).

I would like to present to you the second draft of the Statutes of the Regnum Christi Movement, which will serve as the text to be considered by the general chapter and general assemblies of 2018 which will take place in Rome in Phase 4 of this process. Fr. Eduardo Robles-Gil, LC, said “It has been prepared in light of the contributions collected during the territorial assemblies and the instructions received by the Congregation for Institutes of Consecrated Life and Societies of Apostolic Life. The reasons behind the most important changes to the Draft General Statutes text are laid out in the introduction.”

What Does It Mean?

Fr. Eduardo Robles-Gill, LC, explains the most recent developments effecting the canonical configuration of the Regnum Christi Movement, the identity and the statutes.

Fr. John Bartunek, LC, moderated the event which included questions that he had asked the speakers to prepare answers for, as well as live questions from the audience of legionaries and consecrated members present, and those sent through ‘What’s App’ by some of the Movement’s lay members from around the world.

The draft general statutes of Regnum Christi propose the organization of the different branches, of the Regnum Christi Movement, into a canonical configuration called a ‘federation’. When asked about why this structure was proposed, Fr Eduardo Robles-Gil, LC, answered, “It’s the canonical form with the most flexibility for our needs. When the Movement began it was something simple and spontaneous, but now we have grown, and it is not enough to be simple and spontaneous in living our Mission. The Church needs us to be organized.”

In late 2015, Fr. Sylvester Heereman, LC, introduced chapter seven to us.  He, in brief, outlined the options for juridical status for the lay members, consequences of the options, and the criteria for discernment.

A 5 Step Guide For The Process 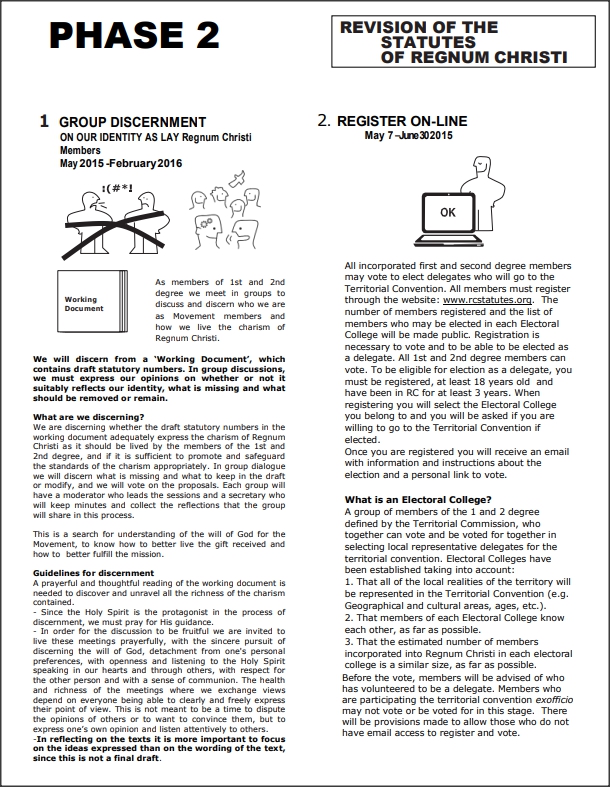