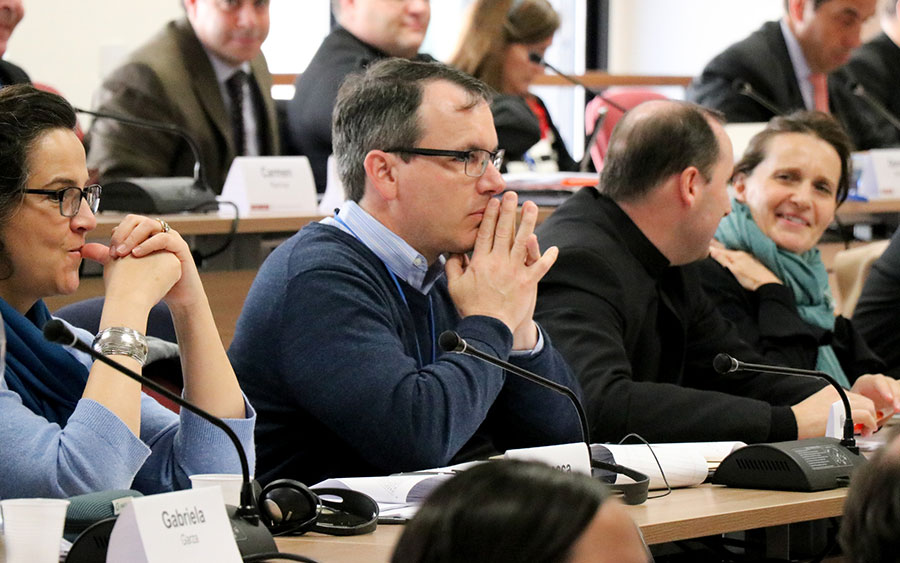 “God our Lord blesses us”

After this session, they had the Mass officiated by Fr. Eduardo Robles-Gil in the Basilica of Our Lady of Guadalupe and St. Philip of Jesus where Fr. Eduardo welcomed the lay Regnum Christi members who join the Extraordinary General Assembly. In the homily, Fr. Eduardo spoke about the layperson’s relationship with God: “Jesus is the one who guides our life and history, we can peacefully go forward in our life because he guides it. Jesus has done great things in each of us, for which we must give thanks to God. Jesus impels us, he lights our hearts but above all, he blesses with visible fruits and above all with invisible fruits.” He also emphasized the layperson’s mission: “We are instruments and apostles, we are destined to make presence of God among men and an effective instrument for meeting people with God. We do this through bringing God to others in apostolic action.”

At the conclusion of the Mass, all the delegates continued with the work of the extraordinary General Assembly with the presence of Fr. Ghirlanda, S.J.

In 2010, Fr. Gianfranco Ghirlanda, SJ, was appointed personal advisor to the Pontifical Delegate for the Legionaries of Christ, Card. Velasio De Paolis. In 2012, the Pontifical Delegate entrusted him with the government of the Lay Consecrated Men of Regnum Christi. He participated as president in the General Assembly of Regnum Christi Lay Consecrated Men (November 2013) and as Vice President in the Extraordinary General Chapter of the Legion of Christ (January and February 2014). On March 19, 2014, Fr. Eduardo Robles-Gil, LC, appointed him a consultant to the Commission for the revision of the Statutes of the Regnum Christi Movement.

After lunch, the delegates had a moment of Eucharistic Adoration. In the afternoon, they met to revise and vote on the first chapters of the Third Draft of the Regnum Christi Statutes.

About the extraordinary general assembly:

The second session of the General Assembly aims to carry out the tasks initiated during the first session, in particular:

Fr. Gianfranco Ghirlanda, SJ, participates in the General Assembly, by virtue of his appointment as pontifical assistant to accompany the Legion and Regnum Christi in the search for an adequate canonical configuration.

The president of the General Assembly is the general director of Regnum Christi.

It is responsible for the following functions:

For more information you can consult the web page www.regnumchristi.org/rcstatutes/en/