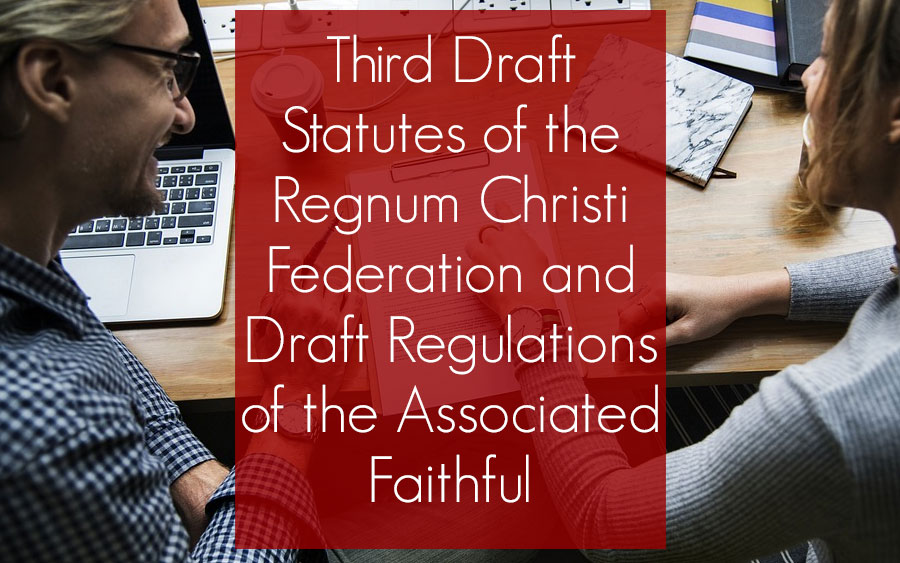 Letter of the General Secretary of Regnum Christi- PDF

Third draft of the Statutes – PDF

To the delegates for the Extraordinary General Chapter,

the delegates for the General Assembly of the Consecrated Women,

the delegates for the General Assembly of the Lay Consecrated Men

and the lay delegates for the Extraordinary General Assembly

I send you all warm greetings this October during the celebration of the Synod of Bishops here in Rome.

I write to you all on behalf of Fr. Eduardo Robles-Gil, Gloria Rodríguez and Jorge López, together with their Councils, and the General Directive Committee of Regnum Christi to present some documents and observations for the next General Chapter and the General Assemblies of November.

This text is presented in two versions in Spanish: the first has three columns (Draft 2.0 – July Working Document – Draft 3.0) with all the changes highlighted, and the second one is simply the final text. There is also an English translation of the final text.

The present draft of the Regulations was approved by the three general directors this October after following the process that is explained in the introduction to the Draft Statutes.

In view of the long drafting process of this document and the short time available at the Extraordinary General Assembly in November, all delegates are asked to prepare written proposals for any change they see necessary in these Regulations. These proposals must be in the form of alternative texts to the numbers presented here, and should be sent to the secretariat of the Joint General Assembly (rcstatutes_cc@regnumchristi.net) before November 12, 2018. In the General Assembly, unless decided otherwise by the Assembly, only the written proposals received in this time frame will be reviewed and voted on.

When the Joint Assembly votes these Regulations in November, lay members and branch members will both participate with a deliberative vote as established by Draft 3.0 no. 55 §3 and Regulations of the Associated Faithful no. 39§2.

In the July and September meetings, the three general governments analyzed the progress of the study carried out by the Technical Commission (See Prot. DG-RC 183-2018). Although the Commission has not yet finished its work, the status is the following:

Some amendments are being made to the Rules of Procedure of the Chapter, the branch Assemblies and the Extraordinary General Assembly. These changes will be included in a document and will be sent shortly to the corresponding delegates. These appendixes will have to be approved by each supreme governing body once they are assembled.

With this explanation of the documents, I invite you to read them, starting with the presentation and the glossary. In his speech on the opening of the Synod, the Holy Father said: “Courage in speaking must correspond to humility in listening” (see Discourse of October 3, 2018). We, the Chapter fathers and delegates of the Assemblies, must prepare ourselves in an attitude of listening and discernment in prayer. The Chapter fathers and delegates will also be available to receive contributions and reflections from those who will not participate. As of October 10, all Regnum Christi members will be able to read the Draft 3.0 at www.rcstatutes.org.

On behalf of Fr. Eduardo, Gloria and Jorge, their councils and the General Committee, I encourage all of us to place the path still before us in the hands of our Heavenly Mother, whom we invoke with special fervor this month. May we all be able to offer a mystery of the rosary every day for this intention and not cease to pray for all the intentions of the Holy Father and the Church.