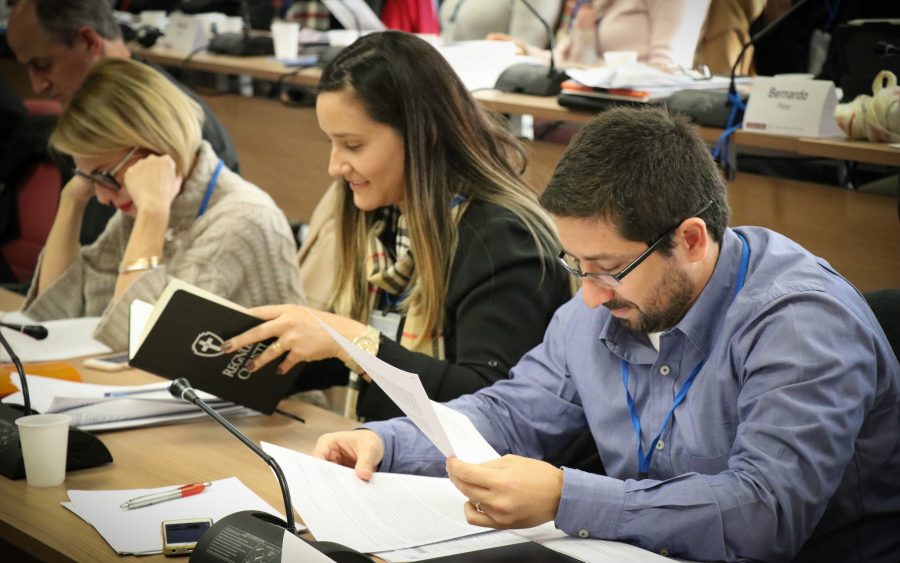 Today’s activities began with Mass celebrated by Fr. Gianfranco Ghirlanda, the consultant of the Commission for the Revision of the General Statutes of the Regnum Christi Movement, in the Basilica of Our Lady of Guadalupe and St. Philip Martyr in Rome, Italy. In the homily delivered to the delegates he affirmed, “We need to trust that God will not abandon us as we implement what he is asking of us.” He invited the delegates to offer themselves to God in service of the other members of Regnum Christi in order to build the Kingdom of Christ together.

The recording of the homily with an English simultaneous translation can be watched here.

Afterwards, the 91 delegates began the ordinary sessions in which they continued analyzing, discussing, and voting on the numbers of the third draft of the General Statutes.

Fr. Eduardo and Fr. Ghirlanda provided some insights during the reflection on the themes of the spiritual life and apostolic activity of the lay members of Regnum Christi. They also responded to questions about the association of lay members to the Federation.

Moments of prayer accompanied the whole day. There were quotes from Sacred Scripture in the Chapter Hall that each delegate could take and reflect on during the breaks throughout the day, as well.

The delegates were shown a video that the students from the Anahuac University in Mexico City prepared for them.

In the afternoon the delegates were able to enjoy lunch and rest, during which several delegates took the opportunity to continue sharing ideas and reflecting on the topics seen during these first few days.

In the afternoon they continued with two more plenary sessions where the delegates reviewed and voted on the numbers in the agenda for today.

About the extraordinary general assembly:

The vice president of the General Assembly is the general director of the Consecrated Women of Regnum Christi. She is responsible for replacing the president in his functions when he asks for it and in case of temporary impediment.

For more information, you can consult the web page www.regnumchristi.org/rcstatutes/en/.

Images of the day can be seen here.