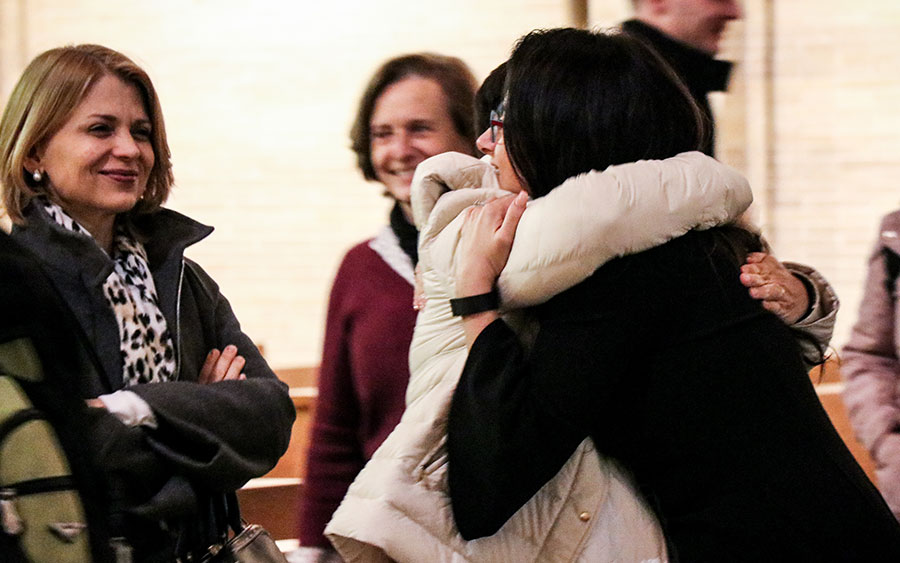 “Follow me and I will make you fishers of men.” With this reflection, the 91 delegates participating in the Extraordinary General Assembly of Regnum Christi began the fourth day with Mass in the Basilica of Our Lady of Guadalupe and St. Philip Martyr in Rome.

Fr. Eduardo Robles-Gil, LC, celebrated the Mass, and Fr. John Pietropaoli, LC, gave the homily. Fr. John said, “Christ asks us, he calls us, he invites us to enter into communion with each other as we receive his Body and Blood, and he calls us to mission, he sends us forth so that others might experience his love, so that others might know him, and might have life, and life to the full.” Listen to the homily here.

During the Mass Gail Gore, the director of communications and marketing of Regnum Christi for the United States, Canada, New Zealand, Australia, Korea and the Philippines, answered a calling to become a lay member of Regnum Christi in the presence of Fr. Eduardo Robles-Gil, which was a great joy for the participants of the Assembly to witness.

The Mass was also offered for the eternal repose of soul of José Ignacio Sánchez Conde, who passed away from a heart attack today. He was the father-in-law of José Antonio Lebrija, one of the delegates from Mexico City. José Antonio returned to Mexico in order to be with his family during these difficult moments. All the delegates offered the Mass and their prayers today for José Antonio and his family.

At the conclusion of the Mass, the delegates went to the Assembly Hall where they continued with comments, reflection and voting on the numbers of the third draft of the Statutes of the Regnum Christi Federation that they didn’t get to on the previous day. At the end of the session the different branches met separately to review some of the numbers of the draft.

The group sessions lasted the rest of the morning through the beginning of the afternoon. The last session was a plenary session. Delegates were able to present their team reflections to the rest of the participants, and then vote number by number as the regulations specify.

Secretary is responsible, under the direction of the Central Commission, to:

The secretary of the Assembly can be assisted in his functions by some assistants, appointed by the General Director.

The moderator of the Assembly is responsible, under the direction of the president, to order the discussion and keep the discussion on the subject matter, giving the floor to the delegates and marking the time that is allowed to intervene, according to the established schedule.

For more information you can consult the web page www.regnumchristi.org/rcstatutes/en/.