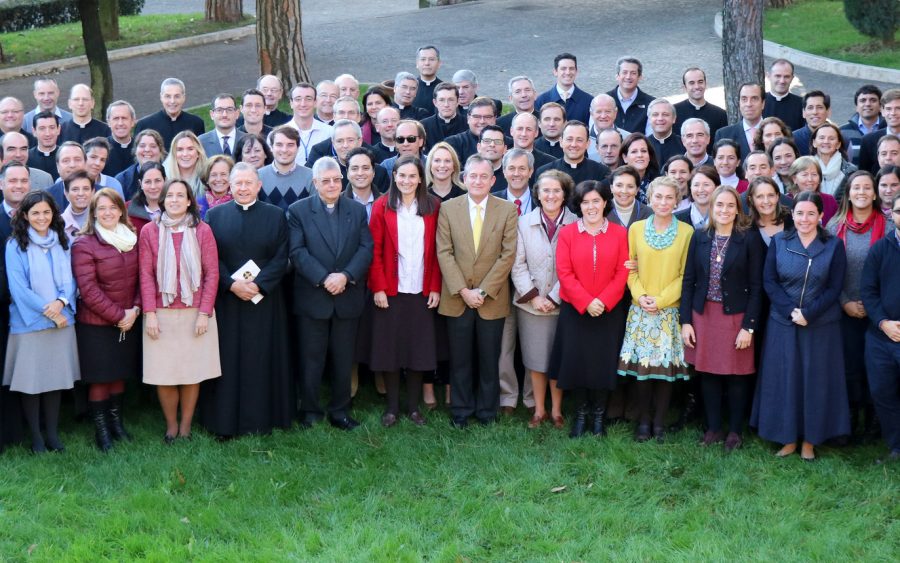 In today’s homily, on the fifth day of the Extraordinary General Assembly in the Basilica of Our Lady of Guadalupe and St Philip Martyr, Fr. Alberto Puertolas, LC, invited the delegates to participate together in the Eucharist and to ask the Lord for light during the process of renewal. Watch the Mass.

At the end of the Mass, the delegates went to the Assembly hall to invoke the Holy Spirit and pray together before the beginning of the first session of the day where they continued with the pending votes of the previous day.

In a plenary meeting, the delegates continued the reflection, discussion and analysis of the pending numbers of the reglamento (rule/regulations) for the Lay Members of the Federation of Regnum Christi. Fr. Andreas Schöggl, LC, was the moderator and Fr. Ghirlanda was present during the whole meeting.

The delegates took a group photo during the morning break and the photo can be seen in the photo gallery.

After lunch, the delegates went to adoration of the Blessed Sacrament, since they wanted to have time for prayer to discern what is being discussed in the assembly.

A constant theme of the discussions has been the way Regnum Christi can fulfill the mission it has received. The comments of the delegates centered on this topic. The guidance of Fr. Ghirlanda was vital to the drafting of a Statute for Regnum Christi in the form of a Federation that will be presented to the Holy See for approval.

At 7:00 p.m. the delegates met in the Basilica of Our Lady of Guadalupe and St Philip Martyr to pray the Rosary together asking for the intercession of the Blessed Virgin Mary for the fruits of this assembly.

Afterwards, the delegates had dinner to say goodbye to the lay members who had finished their part in the assembly, as they are only in Rome for the first week.

The Extraordinary General Assembly of Regnum Christi begins from the decisions and recommendations of the General Chapter of the Legionaries of Christ and of the General Assemblies of Consecrated Women and Lay Consecrated Men on the Third Draft of the Statutes of the Regnum Christi Federation, along with the contributions of the common territorial assemblies, and the results of the International Convention of the Lay Members of 2016.

For more information you can consult the web page www.regnumchristi.org/rcstatutes/en/.

Images of the day can be seen here.