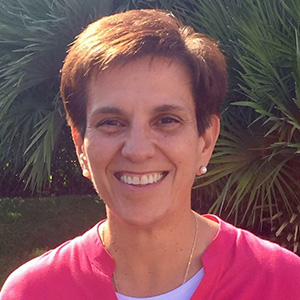 I am Cristina Danel from Mexico City.  I have two younger brothers.  My mom passed away 17 years ago.  I am currently in the community of the general direction in Rome, serving God and my consecrated sisters as a general councilor and as a member of the general committee of Regnum Christi.

My apostolic experience has always been in Mexico.  I have had the following apostolates:

Undoubtedly, one of the greatest gifts that the Lord has given me in my life is having been able to collaborate in Youth and Family Missions for almost 25 years. I would not be who I am today without the missions. What I experienced during all those years is difficult to express in words. I can only thank the Lord for the opportunity he gave me to collaborate in this marvelous work of his, that has done so much good in the hearts of so many people. Every year I was very excited at the closing Mass of the Holy Week missions.  It was touching to see thousands of missionaries with a look so full of God.  I will never tire of thanking God for that miracle. In the missions I learned so much from the faith of the simple people of the villages we visited! I saw priestly vocations saved, people who lived without meaning and who, missioning or receiving the missionaries, converted and returned to God. I witnessed many miracles, because the Lord does great things through a heart that is lent to him. I could tell hundreds of stories.  Thanks to the missions, many people who did not know God had the grace to know him, to experience his kindness, his tenderness, his love, and his mercy.  And for me, there is no greater gift than that a person can know God and meet Christ in his heart.  I can only thank the Lord for his infinite mercy and for blessing the missions so much.  In the missions of Youth and Family Missions all of Regnum Christi united as a family: priests, consecrated women and laity.  All united around an ideal: to preach the Gospel and to bring the Good News of Christ.  It was a profound experience of the apostolic charism of Regnum Christi and of the communion between all of the branches of Regnum Christi.

My expectations for this assembly are that together we can discern under the guidance of the Holy Spirit what should be the canonical configuration that best protects our identity as consecrated women of Regnum Christi, and that we can reflect on the various themes of the draft of the General Statute of Regnum Christi. I hope that we live both assemblies in a climate of prayer and true personal and community discernment.  Also, I hope that we can live the assemblies in an atmosphere of true charity and communion between us and with the other branches of Regnum Christi, so that we only seek to discern what God wants and expects from us and that we do not let ourselves be carried away by fears and predispositions.

Finally, I ask for prayers so that all of the delegates that will participate in these assemblies remain open and attentive to the voice of the Holy Spirit, so that we allow ourselves to be guided, enlightened, surprised and led by Him so that God’s plan is fulfilled in our branch and in all of Regnum Christi, and therefore we can fulfill the mission that He entrusts to us and give glory to the Lord.