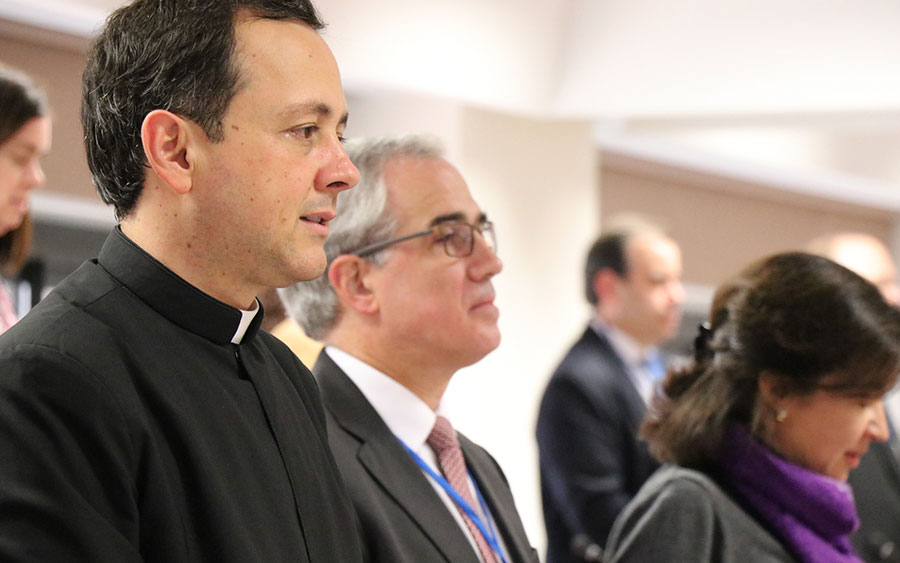 Today, the last day of the Assembly, the delegates began with the Mass presided over by Fr. Gabriel Barcena, LC.  During the homily, Fr. Emilio Díaz- Torre, LC, invited the delegates to conclude this final day of meetings and reflections with joy and confidence. “The Lord is asking us to be confident in Him, to give Him everything we have, our own five pieces of bread and two fish.” He also invited the delegates to stay the course: “Do not stray from the path, look back or come to a stop on this path with Christ.” Watch the full Mass here.

At the end of the Mass, the plenary meeting was held, where the teams that had not presented yet, from the previous day, presented their conclusions. In particular, the main themes from the draft statutes of the presidency and government of the federation. The process of reviewing the final draft of the Statutes of the Regnum Christi Federation also continued on this eighth day.

After a morning break the second morning session began. In this session, the delegates divided into groups by branches to continue with the reflections of the themes distributed during the previous day.

Afterwards, the delegates had lunch followed by Eucharistic adoration where they offered God the work of these days and asked the Holy Spirit to enlighten them to make a good discernment of what God wants for Regnum Christi. Fr. Ghirlanda was also present the whole day.

In the afternoon, meetings continued by branches and Fr. Eduardo Robles -Gil, LC, returned from Mexico to join the delegates for the final hours of the Extraordinary General Assembly. He began the afternoon session with some words of gratitude to the Assembly for the prayers offered for the passing of his mother. Fr. Eduardo celebrated the funeral mass in Mexico City in the University Anahuac and was accompanied by many RC members. Pictures from the funeral can be found here.

The afternoon was spent concluding the voting process and reviewing the Statutes of the Regnum Christi Federation.

From Thursday, December 6 to Friday, December 7 the General Chapter of the Legionaries of Christ and the respective Assemblies of the Consecrated Women and Lay Consecrated Men of Regnum Christi will meet separately to review and discuss the conclusions of the Extraordinary General Assembly. On Friday evening there will be a presentation of the final draft and a closing dinner for all of the participants who attended these meetings.

For more information, you can consult www.regnumchristi.org/rcstatutes/en/.

Images of the day are available here.